How can an avalanche airbag help me: The Brazil Nut Effect

There are many statistics showing that avalanche airbag packs have been helpful in many cases of avalanche accidents and burials. What the avalanche airbag does is called the “Brazil Nut Effect”, it creates a light and large mass (object) strapped to your body, which will help you to rise above through smaller and heavier particles during a snow slide.

BUT! Avalanche airbag packs are only helpful in critical situations of avalanche slides, they in no way guarantee survival and they are not meant to be used as the only mean of protection, so you should always have all your avalanche safety equipment with you + helmet and protectors. Avalanche airbag cannot substitute extensive knowledge of terrain, snow and weather conditions or the help of your well-trained friends, who you actually should take with you on your powder day! If you are not sure about the equipment you should have with you, read our Avalanche Safety Equipment Guide to see if you have all you need in case of emergency.

One can use avalanche airbag backpacks during various arts of skiing, ski touring, snowboarding, splitboarding or snowmobiling – freeride, backcountry, side-country, high alpine, heli- or cat accessed riding, single or multiple-day touring. According to the applied use, you should decide on which kind, size and system is the best suitable for you.

Avalanche airbag systems explained: WHAT is the difference?

The inflation bag has two identical sides which are filled separately in case one side is damaged, there is still a possibility to inflate the non-damaged half of the airbag. The cylinders are made of steel or carbon and can hold up to 300 bars of internal pressure, these can also only be refilled by ARVA, therefore they belong to the category of non-refillable cylinders. For the winter season of 2018/19, Arva offers backpacks with the reactor system in the following sizes: 18, 24 and 32 .

Arva avalanche backpacks with reactor systems offer diagonal ski adjustment on the front side of the backpack. Additional equipment such as ice axes can be attached via multiple loops.

BCA is one of the major players on the avalanche safety market. They have developed their own float system which consists out of a 150 L single-chamber airbag and a cylinder filled with compressed air. The system is triggered by a Bowden cable connecting the airbag and the cylinder.

The airbag is positioned on top of the backpack and provides additional protection from head trauma or injury of the neck or upper body but leaves the sides of the body free. BCA offers avalanche backpacks with the float system in various sizes, like  22, or  27  L.

Except for the 8L Float, all BCA avalanche airbag backpacks offer diagonal ski carrying systems and are compatible with the snowboard carry attachment – which has to be purchased separately, except the 32 L Float, where the vertical snowboard carry is already in place.

Black Diamond and the JetForce System

JetForce is used by the outdoor brand Black Diamond. This system is special since the airbag is not filled through a deployment or a one-use cylinder. The trigger body is a battery powered fan which can inflate the 200 L bag in 3,5 seconds. Once the fan inflates the bag, it keeps on refilling it for about three minutes – which might be crucial if your airbag tears or punctures during an accident. After three minutes the fan switches off and deflates the airbag, which can create an air-pocket in case of a burial or help with the packing of the airbag. This system is one of the more expensive ones, but you can train deployments or make sure your avalanche backpack works before going out in the powder every single time. Plus, thanks to the battery-powered fan, costs are minimal.

The JetForce has a lithium-ion battery and can be very easily rechargeable, and is also very travel-friendly. One fully charged battery can deploy multiple times and is safe while used in down to -30 degrees Celsius.

ABS has been in the avalanche safety airbag market for some time now, which means they have been tested through times and went through many experienced hands. ABS uses the TwinBags airbag system which deploys on the sides of the backpack. Together, the TwinBags have 170 L volume and are filled separately, which also means, if one of the bags is punctured, the second half stays fully functional. The ABS cartridge works with a small explosive charge puncturing the cartridge and releasing the gas into the TwinBags. The cartridges are available in carbon and steel versions and are non-refillable.

Partner activation built in as standard. With the introduction of partner activation, P.RIDE is ushering in a new era of self-rescue and companion rescue. For the first time, a built-in wireless connection with partners makes it possible to actively protect other group members before an actual burial situation occurs. P.RIDE therefore closes the functional loophole in all previous avalanche airbags – representing a life-saving innovation. Group members are synchronized automatically when they simultaneously open their activation handles. This enables partner activation – with no need for complicated programming. Group mode allows a backpack wearer to simultaneously activate his or her own airbags and those of all other members. If the members of a group plan to tackle a slope individually, one or more of these winter sports enthusiasts can temporarily switch to single mode. In the event of a critical situation, this then allows specific remote activation of individual airbags. (©ABS Airbags)

Mammut offers the  airbag technology 3.0. This technology is lighter and more comfortable to wear and includes narrower straps for some of the backpacks and optimized hip belts. The 3.0 technology cannot be combined with older backpacks. Both systems have a 3 second inflation time and are safe to operate in temperatures up to -30 degrees Celsius.

The cylinders (cartridges) come in carbon and steel and aluminum, where we can offer you to fill up your used cartridge in one of our stores for around € 25 (only if lid is on the cartridge). Both of the systems, the P.A.S. and the R.A.S., are removable and compatible with backpacks of various sizes so you can choose the right size for your adventure.

You can find all users manuals for the Mammut R.A.S. 3.0 as well as for the older systems in various languages on the official Mammut website. 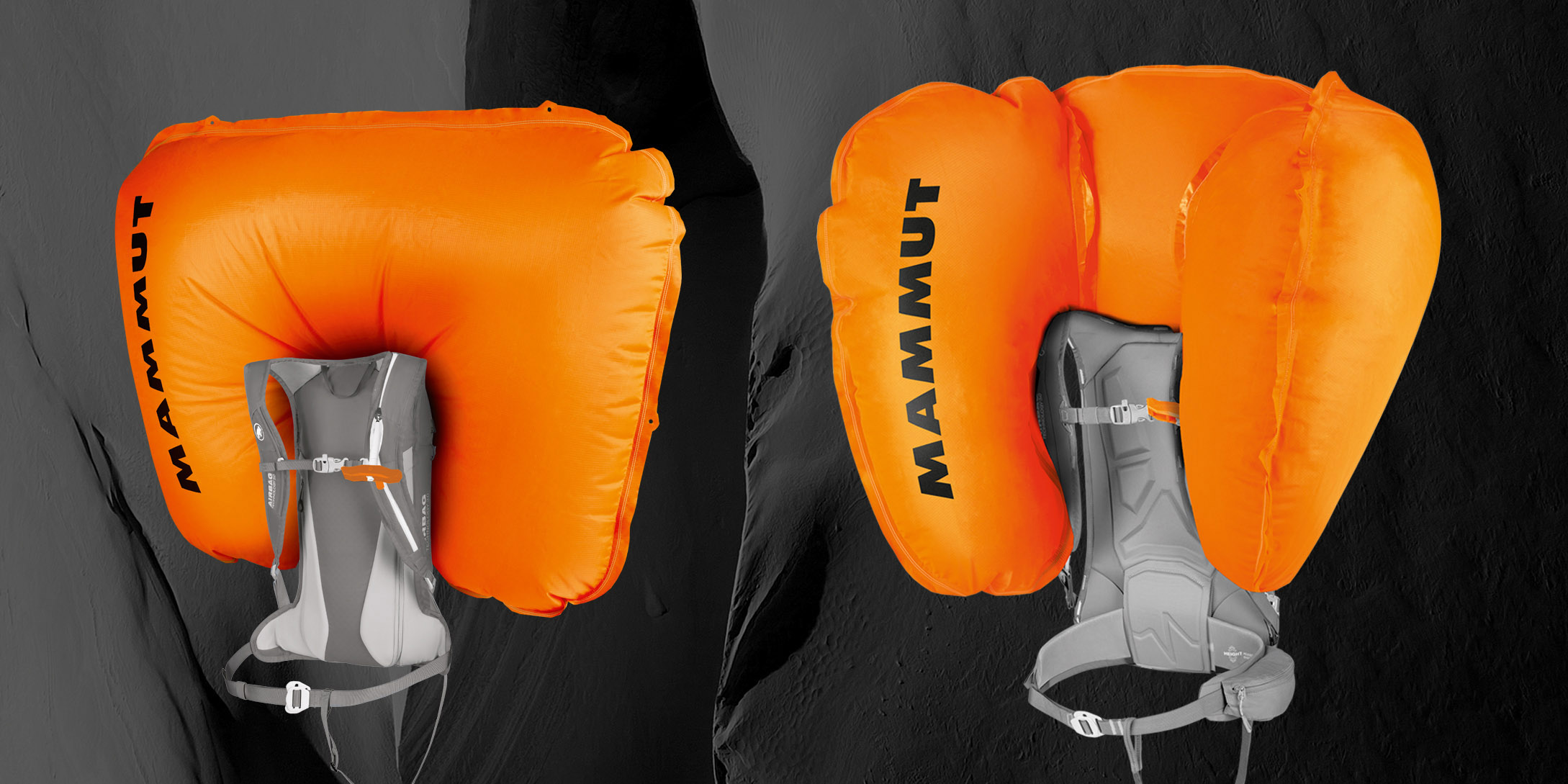 On the picture above you can see the Mammut R.A.S. on the left and the P.A.S. on the right

The Mammut Protection Airbag System (P.A.S.) is one of two systems Mammut currently uses for their avalanche airbag backpacks. This system has a 3D shaped airbag which is made out of sturdy and tearproof ripstop nylon and is designed to offer as much protection as possible in case of an avalanche accident. The P.A.S. airbag deploys around its wearer’s head, neck and chest and therefore also creates an additional protection from mechanical injuries.

The main difference between the R.A.S. and the P.A.S. systems by Mammut is the positioning of the airbag system: the R.A.S. is located on the top side of the backpack and deploys mainly above head and to the side, whereas the P.A.S. deploys into a 3D-like shape, creating additional coverage for neck shoulders and chest area. The R.A.S. is a system which concentrates on weight reduction. The airbag with the carbon cartridge weighs only 1,5 kg – the rest depends on the size of the backpack. The smallest 20 L Mammut R.A.S. backpack weighs only 0,5 kg.

The Ortovox AVABAG system has been on the market since winter 2016. It receives very good impressions, especially with ski tourers thanks to its very light weight of 940 grams, which is the weight of the airbag without the cartridge. The AVABAG airbag comes in a very bright orange color which is helpful when searching for a buried person.

One of the things which you won’t find with other manufacturers is the adjustable length of the trigger handle, which can be pulled out in two sizes for optimal handling. Ortovox also offers various sizes of its backpack suitable for many activities, from one day freeriding to hut-to-hut tours.

The AVABAG system is removable and compatible with all ORTOVOX AVABAG backpacks; the cartridge can be refilled in one of our stores (only if lid of old cartridge is on).  We have dedicated some time to test the Ortovox AVABAG so you can read the full product review on our blog.

All Scott avalanche backpacks are equipped with the Alpride System, which is an independent airbag system producer from Switzerland. The Alpride system is made out of only a few parts – which also means fewer parts to beak right? The very difference of this compared to other systems is the dual use of cylinders, which are deployed by a very simple process of puncturing and subsequent release of the gas.

The two cylinders work on the same principle as life jackets and have been used in the Navy for about 50 years already. Scott gives you the chance to remove the Alpride system so you can use your backpack without it if. Additionally, you can expect your Scott avalanche backpack to have a D3O® back protection plate.

On the official Scott web-page, you can find all additional info regarding mounting or reloading of the system or download a users’ manual.

The all new Alpride E1 is a fully electronical avalanche airbag system that pushes the boundaries of innovation. Its supercapacitor technology, along with exceptional design results in one of the lightest
electronical airbag systems on the market to date.

• Supercapacitor technology: cold temperatures do not affect the performance or charge of the supercapacitor
• Turbo radial fan: more power and volume in a shorter amount of time
• 1280g full system weight: 720g lighter than any other electronical system on the market
• Mechanical trigger and deflation release: no electronic error possible
• No cartridges / no li-ion battery: no restrictions for travelling and shipping
• 2x AA batteries: recharge on the mountain without power supply

a selection of avalanche airbag backpacks 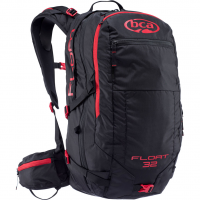 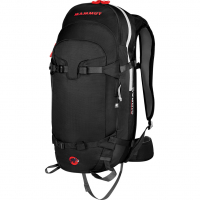 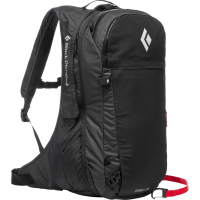 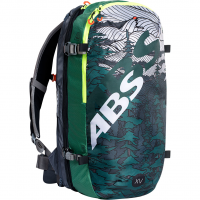 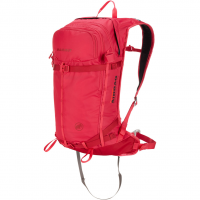 How to take care and maintain my avalanche airbag backpack

Before the season starts, it is recommended to go through an actual deployment, to find out possible bugs, tears or failures in the system. After each deployment, inspect the airbag carefully to prevent any tears or holes, as well as the handle to see any scratched or weak spots on the connection between the handle and the cartridge(s). And of course: Read the user’s manual thoroughly to see any additional info from your manufacturer.

How to travel with avalanche airbag backpacks

As you have already seen above, there are many differences in all those avalanche airbag systems and the approach of the IATA also differs from backpack to backpack. To help you with this topic, we have dedicated a whole blog post to the transportation of avalanche airbag backpacks in a plane, there you will find all info and forms needed to take your avalanche safety equipment on an air-hauled trip with you.

→ How to fly with an Avalanche Airbag