HOMESkiingBindingsAlpine Bindings
Alpine Bindings27 Artikel
Please choose your size or add more products to create your set. Your set has been succesfully added to your cart. Please select your size. ONE_SET_MSG_4

Ski bindings: connecting human and skis. They assure safety, performance and transfer of power. While most skiers spend a lot of time deciding on the right ski, there are not many spending even half of the time and effort on picking the right binding. But this does the bindings wrong, because there are lots of different models with different characteristics by the various brands: Look, Marker, Rossignol and Salomon.

The binding needs to hold you properly, but release at the right moment

Commonly known, the binding holds the boot to the ski. But that is not all. It also assures the needed transmission of power, damps hits in uneven terrain and gives you safety while minimizing the risk of injury. Because also the best skiers crash from time to time! As of this, the most important aspect is that the binding releases at the right moment, to prevent bone fractures or tendon tears.

How does that work? Your boot is secured into the binding using heel and toe pieces. These are adapted to the sole length and individual characteristics of the skier. 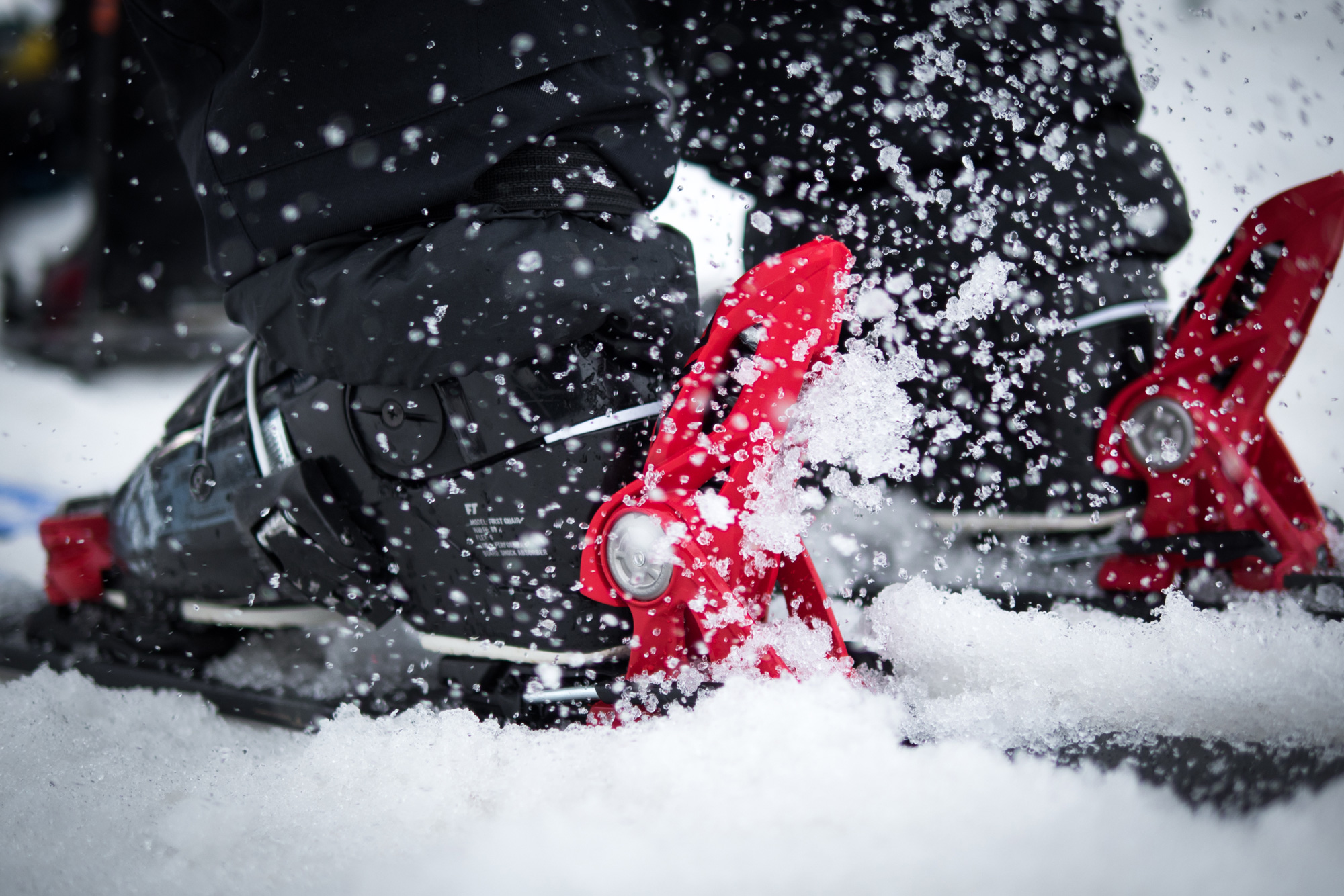 Technologies of the alpine ski binding

Ski bindings are made of many many small pieces – up to 200! Obviously, this makes them pretty complex. Years back, ski bindings were made of wood and leather. Today, high quality metals are being used: titanium, carbon and magnesium are robust and account for stability while keeping the weight low. Other bindings, again depending on the needs of the skier, are made mostly of plastic, which also makes them cheaper.

The toe pieces hold the tip of the ski boot while the heel pieces keep the heel in place. Both hold springs, which hold the boot. As soon as there is too much pressure on these springs, the heel piece opens up, releasing the skier.

Additionally, there are pieces connecting heel and toe. These are called bases and give additional stability while increasing power transfer. As of this, these bindings are often used in racing.

The bindings of different price categories and areas of use also vary in their elasticity. When elasticity is too low, hits are not dampened enough which leads to early releases. If elasticity is too high, the binding will release too late, which in turn increases the risk of injury. 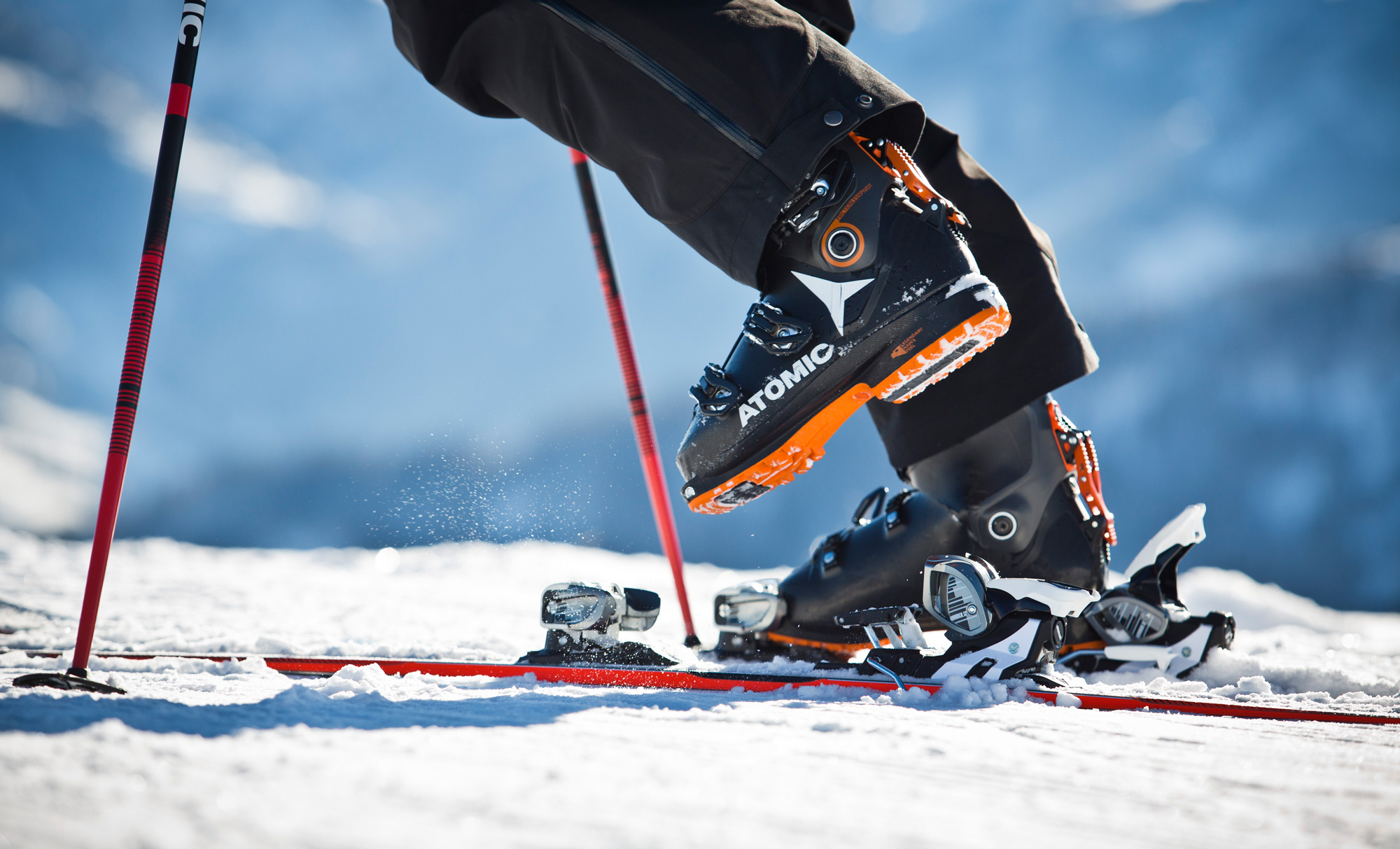 Not every alpine ski binding fits every ski

Most skis, especially on-piste ones are already equipped with bindings. These fit the ski both optically and by their characteristics.

When the binding is purchased separately, which is the case with freeride and allmountain, as well as freestyle bindings, attention needs to be paid to it suiting the skier and the ski. Next to area of usage, the release value (or z-value) is important, as well as the width of the ski itself. Because these bindings come with ski breaks, and these need to fit the width of the ski. With most bindings, you can choose between several widths. The ski breaks assure that in case of a crash and release, the ski does not go too far away, but rather also stops on steep terrain. This is good not just because you do not want your ski to disappear down the mountain, but also because a ski racing down by itself can hurt other people severely. What is important, is that the ski break is wider than the ski, but still keeps as little space to the ski as possible. Otherwise, the skis will interlock when skiing with your skis very close to each other or in case of shaky terrain. They should be a bit wider than your mid width, because they are a bit farther behind than the middle of the ski.

The needed release value is calculated using your weight, your height and age, as well as skiing skills and sole length. The higher it is, the later the binding releases. As of this, the release value should always be set by experts, because they use special equipment and tools to test the bindings and simulate crashes in order to find the exact value needed. As time passes, you should also adapt your release value, because not only your age changes, but also your skills and your weight.

Also, additional capabilities of your binding are to be considered. As the sole compatibility: whether your binding only fits regular alpine soles or also so called WTR “Walk to Ride” rocker soles. And whether the sliding plate can be adapted to fit different sole heights.

When mounting your binding, not only the release value itself is important, but also your style of skiing. Because the binding will not always be mounted the same way. Those who enjoy park skiing, will probably also want their binding to be right in the middle of the ski, enabling skiing backwards easily. Freeride or allmountain skiers, will have their mounting point a bit farther back. This gives a better float in powder.