HOMESki TouringBoots
Boots98 Artikel
Please choose your size or add more products to create your set. Your set has been succesfully added to your cart. Please select your size. ONE_SET_MSG_4

To make your skitour up pure summits, descents through untouched winter wonderlands and those quick ascents on race touring skis a real joy, you need the fitting touring boots. These are, depending on their design, more or less different to alpine boots. They all have two modes: The ascent-walking-mode and the descent-skiing-mode. In walking-mode, they are way more flexible and softer than alpine boots are. In ski-mode, they offer the needed stability for the descent. The flexibility of the boot itself depends on its special characteristics. It can be distinguished between allround, uphill focused, freeride and racing touring boots. These are manufactuered by different brands such as Dynafit, Scarpa, La Sportiva, Scott, Fischer or Salomon for both women and men.

Just like touring skis, touring boots have individual characteristics, based on their manufacturer, materials used and design.

Cuff rotation: This is really important for the ascent. The higher the rotation degree, the more movability there is between boot and cuff. That makes walking with the boot more comfortable, meaning a nicer ascent.

Cuff alignment angle: This angle is common known from alpine ski boots. It basically decides the position of the cuff in ski-mode. The larger the angle, the more aggressive the ski is when going downhill. On many touring boots, this angle can be adjusted accordingly. Which angle fits you best depends on your technique when skiing.

Inner shoe: It is distinguished between the conventional lacing one, and the thermoformable one. With the latter, the inner shoe is adapted to fit the individual foot, reaching a optimum fit.

Flex: The flex tells the stiffness of the boot forwards. The higher the flex, the stiffer and the more stable the boot when going downhill. At the same time, the ankles lose flexibility. Generally, a downhill focused touring boot will have a higher flex. However, this measure is not standardized, meaning that direct comparisons of flex between different brands might be misleading.

Buckles: Touring boots mostly come with three or four buckles. Uphill focused boots will rather have two buckles or BOA-System, leading to more flexibility, while a freeride touring boot will have three or four buckles to reach more control and downhill performance. It is especially convenient when these buckles have precision adjustment. 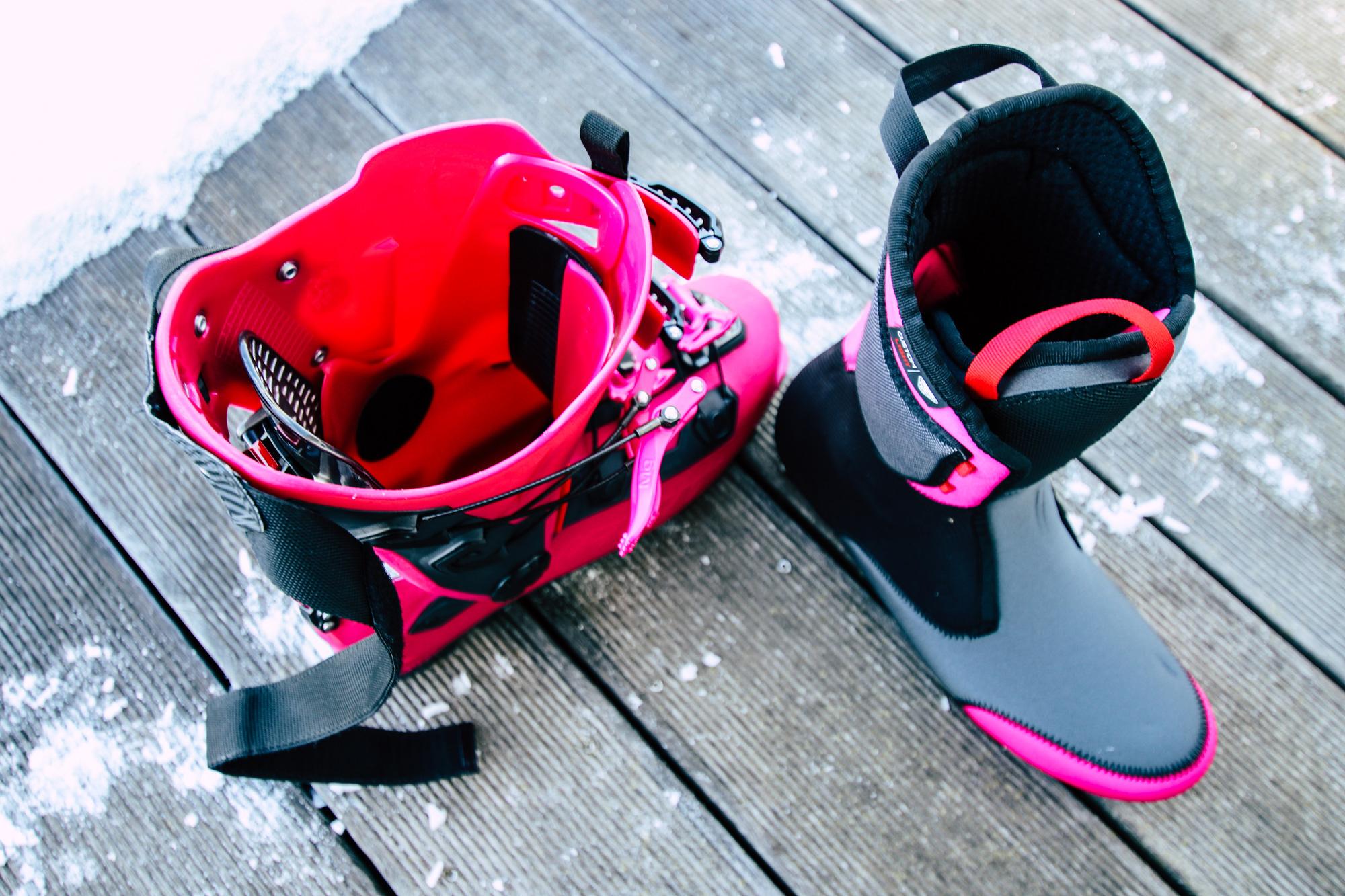 Uphill focused or freerider, allrounder or racer – The different applications of touring boots

It is not only the size and fit that matter, but much more making the characteristics of the boot fit the planned area of use as well as the rest of the equipment. Because just like the binding needs to fit the ski, the boot is also part of the big thing. Whoever is going for an uphill-focused ski with a light-weight tec-binding, should also be using a light-weight touring boot. At the same time, a freerider should use a more stable touring boot for his outdoor adventures.

Uphill-focused touring boot: With this boot, the combination of light weight and comfort in the ascent are focused on. The cuff rotation will be higher and the weight is at around 1.000g.

Freeride touring boot: This boot needs to be able to control a wide freeride ski, meaning it has to be rather stiff and very stable. As of this, it weighs more than other touring boots: 1.600g and up. This boot mostly comes with four buckles and a larger cuff alignment angle.

Allround touring boot: Just like with touring skis, there are also allround touring boots. These are built to balance uphill and downhill performance: Not to heavy for the ascent but at the same time stable for enough for the descent. This boot weighs up to 1.500g.

Race touring boot: This boot is, just like the race touring ski and ist binding, very minimalistic. The most important factor is the weight. To minimize this, only two buckles, lacing or the BOA-System and light materials such as carbon are used. Moreover is the inner shoe thinner and with less cushion, making the boot weigh only around 850g but a little less comfortable than a regular touring boot.

The touring boot needs to fit both foot and binding

Women’s and men’s touring boots are different in their stiffness and height. While men’s boots are usually a bit stiffer, women’s boots have a shorter cuff. This is because the boot is designed to fit women specifically, and these generally have a lower calf muscle. As of this, you should always go for the boot to fit your body. Another important aspect is the size. Touring boots come in mondopoint sizes, just like alpine boots. To make your boot and sole length fit perfectly, we have created a sole length and mondo point guide for touring boots. Also be aware, that the inner shoe usually wears out a little after a while, meaning better buy a smaller one than one that is too large. When trying the boots on, it is totally acceptable if your toes touch the boot. Only when standing up and bending you knees, they should not touch anymore or just touch slightly. But the boot really needs to fit tightly, not too tight though. Too tight boots will lead to pain while too much space will cause blistering.

©Touring boots in the ascent by Atomic

What else to consider when buying touring boots

Before heading into your first ski tour with your new ski touring boots, here is some helpful advice: If you plan on using your touring boots with alpine bindings – which generally is not advisable – you might have to change the outer soles (only possible in freetouring). On touring boots, these rubberized and moulded, making them higher and therefore not release properly in alpine bindings. Especially when doing alpine tours, it can be helpful to have crampons with you, these are compatible with most touring boots and can be purchased separately. But most important is your safety equipment. Because you should never head into the backcountry without having your tracker beacon, shovel and avalanche probe with you!